ROSEWOOD – King Adam of Überstadt is the 25th Chair of the Grand Unified Micronational after winning half the vote in a three-way race. He assumed office on 25 December at 00:01 UTC, relieving Acting Chair Jonathan I of Austenasia.

Eden found some of his strongest support among younger members, while nations often counted among the so-called “old guard” of the MicroWiki community tended to favor Adam. Such preferences were not without exception. Paravia, Roseland, and Shorewell, all founded since 2014, voted for the winner. The new chair will still face a generational gap in the organization, and will have to avoid alienating younger members.

Adam has not yet made a public statement on his victory, but reports that he has already received private messages of congratulations from other GUM members.

ROSEWOOD – King Adam of Überstadt has begun campaigning to be the next Chair of the Grand Unified Micronational, a long-time institution of the MicroWiki community. The other candidates are Emperor Thomas of Zenrax and King Eden of Edenopolis.

The king released a statement Saturday night highlighting his political experience and outlining his platform. He emphasized education and using GUM activities to promote members’ internal development. The other candidates have also publicly detailed their platforms, and similarities between the three have led some within the organization to say the race will be decided by personal loyalties rather than ideological differences between the candidates.

Adam nominated himself in the late hours of 4 December and announced his campaign to the GUM Lounge the same night. The other candidates’ declarations of candidacy preceded his by days or, in the case of Thomas, weeks. The news confirmed rumors that he would run, and it became clear that the election would be a three-way race when Bradley of Dullahan, Wyvernian delegate acting Vice Chair, refrained from nominating himself. Emperor Jonathan of Austenasia, acting Chair, had previously indicated that he would not run.

No GUM member has publicly indicated preferences in the race. Voting will begin on 18 December, and on Christmas Day, the 25th Chair of the Grand Unified Micronational will assume office.

ROSEWOOD – Last Thursday night, the lowlands of the Pacific Northwest were awed and inconvenienced by their first snow of the season, but the powder did not stay for long.

American weather forecasts days before the snowfall suggested the possibility of several inches of precipitation, but gradually decreased their predictions. By Thursday morning, the US National Weather Service was predicting between one and three inches in the Puget Sound basin, home of the small nations Higgsbury and Überstadt.

The snow clouds came ashore in Oregon and drifted north. Flakes began falling on Higgsbury in the early afternoon, and Überstadt in the evening. At the Überstadti capital, Rosewood, about three inches fell overnight.

While this is not an extreme amount of snow, the region’s steep hills and curving thoroughfares make driving on slippery roads especially hazardous. No citizens of affected small nations were involved in any vehicular accidents, but were impacted by the overall slowing of surrounding traffic.

The thaw began Friday, and by Saturday afternoon, the blanket of snow had melted away and trickled into the streams and rivers. For the brief time it lasted, though, the beauty of the frozen outdoors was a delightful spectacle. In the words of Higgsbury’s leader, “the crisp, clean aesthetic of winter [hung] from every limb of every tree; all of life seemed muffled by the peace of the snowfall, familiar forms still echoed in its shape but exciting and different with the prospect of the icy powder.

“It was one of the most beautiful sights I have seen in my entire life.” 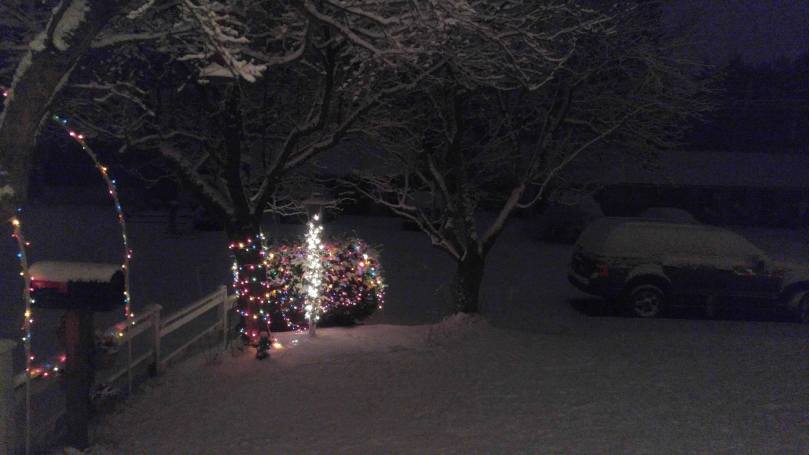 Above: Snow covers western Rosewood and surroundings. Photo by the Duke of Edmount.